The Development of Canine Hip Dysplasia

A developmental disease is not present at birth but develops with maturation and age. The series of radiographs below illustrate how a loose hip gradually develops osteoarthritis (OA). 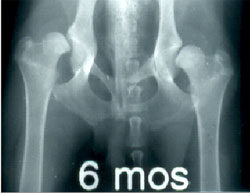 At six months, this dog's hips exhibit extreme laxity, but no OA. 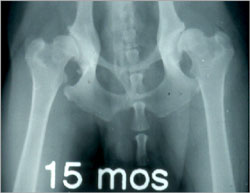 At 15 months, laxity is accompanied by the development of "mild" to "moderate" OA: the femoral heads appear slightly "flattened", the femoral necks are beginning to thicken and the acetabular rims are in the early stages of remodeling.

At six years, OA has progressed into a "severe" form, marked by extreme bony remodeling of the acetabular cups and the femoral head and necks.  Cartilage has been eroded and bone is rubbing on bone.