The method is quantitative (i.e., it assigns a number to joint laxity) as opposed to being qualitative or subjective (e.g. excellent, good, fair, etc.). The index is not as vulnerable to inter- and intra-observer errors commonly associated with subjective measurement systems.

The index method is calculated by digitally superimposing precision circle gauges on the cortical margins (rims) of the acetabulum and femoral heads (example at left) to identify the respective geometric centers. On the compression view, if the joint is free of osteoarthritis, the centers of the acetabulum and femoral head should coincide indicating that the joint is indeed concentric. On the distraction view, the distractive force causes separation between the centers. The distance, d, between the centers is a measure of hip joint laxity. However, dalso varies with dog size (larger dogs would likely have larger d's than smaller dogs), with growth of the dog from puppy to adult, and with magnification due to variation in hip-to-film distance. To circumvent these potential sources of variation, d is normalized with respect to the size of femoral head and acetabulum by dividing it by the radius of the femoral head, r. The resulting index, Distraction Index = d/r, is a unitless number ranging from 0 to 1 (or more). The laxity index computed for the compression view is called a compression index (CI), likewise, the laxity index for the distraction view is called the distraction index (DI). 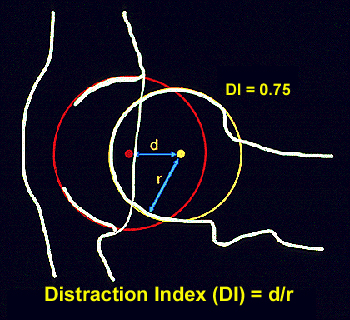 The distraction index is a measurement of hip joint laxity. It does not allude to a passing or failing score. Hips with DIs on the distraction view that are less than 0.3 are considered to be tight, while DIs close to 1 are considered to be extremely loose. The DI is an indication of the "percent out of joint" that the femoral head is displaced from the acetabulum. For example, DI=0.58 means the femoral head comes out of the joint by 58%, DI=0.75, 75% out of joint (see figure), and so on. This also makes interpretation of the DI more intuitive: a hip with a DI=0.50 is twice as lax as a hip with a DI=0.25.

To obtain proper diagnostic radiographs, the musculature around the hip must be completely relaxed and so the dog must be under deep sedation or general anesthesia. Therefore, the laxity as determined by the DI is called passive hip laxity, as opposed to functional hip laxity which is the pathological form of hip laxity that occurs in dysplastic hips during weight bearing. (Clearly, functional hip laxity is of greater diagnostic interest, but there are presently no methods to measure it.)