For over 60 years, it has been empirically accepted that hip joint laxity is related to the development of osteoarthritis (OA) or degenerative joint disease (DJD).

The Risk of Developing Osteoarthritis

However, prior to the research conducted at the University of Pennsylvania, there existed little or no scientific evidence to support this view. The problem was approached in two ways: First, the relationship of hip joint laxity with the coexistence of OA in a cross-section of adult dogs was examined (a cross-sectional study). Next, the relationship of laxity at an early age with the appearance of OA at a later time was investigated (a longitudinal study). The results are summarized below.

An analysis of 142 dogs (mean age of 20 months) showed a direct relationship of hip laxity (as determined by the DI) to the radiographic existence of OA. Hips with low DI's, i.e. "tight hips", were very unlikely to exhibit OA. In this study only one hip with a DI less than 0.30 exhibited any evidence of OA (DI = 0.29). The converse was not true; that is, not all hips with a DI greater than 0.30 necessarily showed radiographic evidence of OA at the time of evaluation. However, as the DI increased, so did the frequency of OA. (see the graph below). 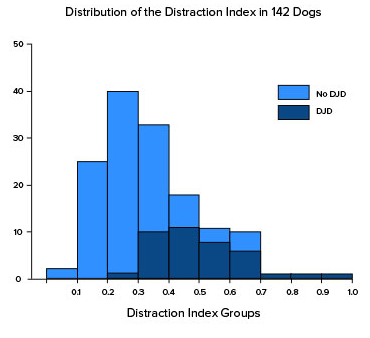 It is interesting to note that more than 50% of the hips in this study had distraction indices below 0.30, yet only one hip in this group < 0.30 showed any radiographic evidence of OA. There appears to be a cut-off point - DI approximately 0.30 - below which canine hips have very low susceptibility to getting OA.

In this study, dogs were radiographed at 4 months, 12 months, 24 months of age. A logistic regression model was invoked to determine the contribution of factors such as DI, Norberg Angle (NA), subjective score (OFA), weight and gender at 4, 12 or 24 months to the risk of developing OA at or before 3 years. The analysis indicated that the DI at all age groups was the most significant prognostic factor for OA and that the strength of the predictive power improved with age. The sex, weight, NA and subjective (OFA) score were not found to be significant factors in this study.

Since this early study we have analyzed the PennHIP database for the relationship of hip OA to the PennHIP DI in 8 breeds of dogs (See following Figure).

Figure, Logistic regression curves showing probability of radiographic osteoarthritis as a function of the PennHIP distraction index for dogs of eight common breeds that were ≥24 months of age at time of evaluation based on the PennHIP database in November 2010. Tight-hipped dogs (those with small DI's) are at a low risk and loose-hipped dog's (those with high DI's) are at a high risk. In other words, the larger the DI the greater the risk for developing DJD in this case by a mean age of three years.

The numbers of dogs used to generate each breed-specific curve are 497 Bulldogs, 380 Bernese Mountain Dogs, 1600 German Shepherd Dogs, 2962 Golden Retrievers, 4136 Labrador Retrievers, 335 Newfoundlands, 695 Rottweilers, and 508 Standard Poodles. Note the spatial shift to the left for the German Shepherd Dog, indicating increased risk of expressing osteoarthritis at a given distraction index compared with other dog breeds. 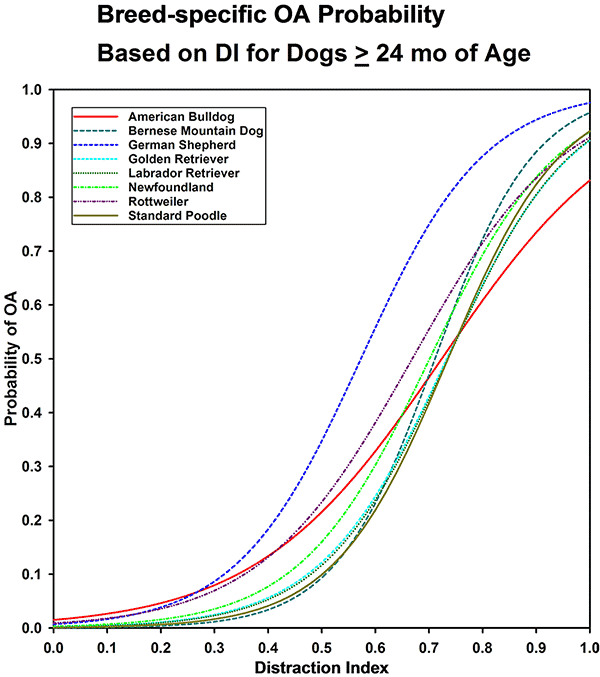